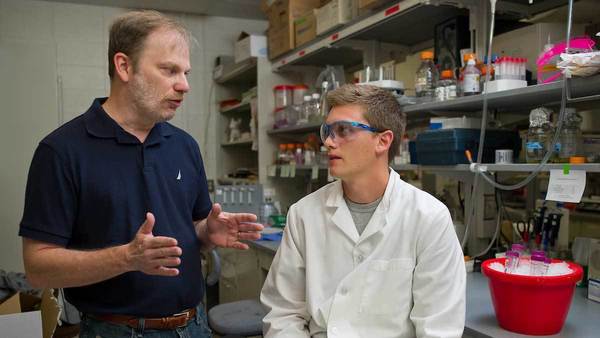 In a new study published in the Journal of Experimental Medicine, scientists at the University of Notre Dame have discovered that the pathogen Mycobacterium tuberculosis (MTB) releases RNA into infected cells. This RNA stimulates the production of a compound known as interferon beta that appears to support the growth of the pathogen.

“The results suggest that our immune response to mycobacterial RNA is beneficial for the pathogen and bad for the host. It’s the total opposite of viral infections,” said Jeff Schorey, George B. Craig Jr. Professor in the Department of Biological Sciences at Notre Dame and co-author of the study. “This study gives us a better understanding of how the mycobacteria causes disease and what makes it the most successful pathogen in human history.”

MTB infections cause a battle between the immune response and the ability of the bacteria to circumvent that response — who wins the battle determines the body’s ability to control the infection. Schorey and Yong Cheng, a research assistant professor at Notre Dame, set out to determine how mycobacteria RNA could be affecting the host response. What they found was that by releasing RNA, the bacteria set off a chain reaction inside the macrophage, a cell type of the immune system — resulting in a mechanism that benefits the survival of MTB through the production of interferon beta.

While researchers have long known that bacteria produce proteins and other compounds to modulate an immune response, such a role for mycobacterial nucleic acids has only recently been defined. In viral infections, as opposed to bacterial infections, the virus releases its nucleic acids as it needs the machinery of the host cell to help make viral proteins and replicate its genome. In contrast, bacteria already have the machinery for these processes in place, suggesting the release of RNA into the host cell is intentional. The authors found that the MTB use its secretion system known as SecA2 to mediate RNA release from the mycobacteria.

“Bacteria have everything they need to make their proteins, so the fact that they were releasing nucleic acids was a surprise,” Schorey said. “These bugs are using this RNA-sensing pathway, which has evolved to promote antiviral activity — so in other words, the bacteria are manipulating our own immune system against us.”

MTB is the No. 1 cause of death by an infectious organism, and kills up to 1.8 million people each year. The World Health Organization estimates 200,000 of those deaths are children. Health officials lack an effective vaccine against pulmonary tuberculosis, and antibiotics used to treat the disease must be taken for six to nine months — a daunting regimen that challenges patient compliance. The disease is prevalent in parts of the world where health care systems lack infrastructure and funding.

Despite those challenges, Schorey, an affiliated faculty member at Notre Dame’s Eck Institute for Global Health, said the study’s results show potential for the development of immunotherapies to selectively stimulate protective immune responses as a treatment option for MTB and other bacterial infectious diseases.

The study was funded by the National Institute of Allergy and Infectious Diseases.

Originally published by Jessica Sieff at news.nd.edu on December 05, 2018.