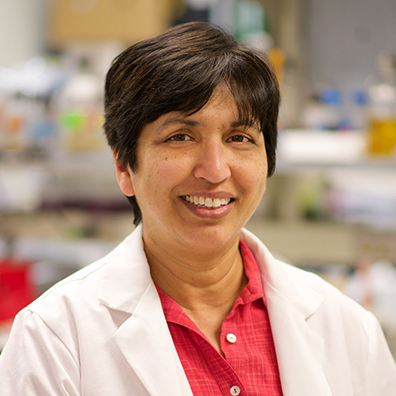 Congratulations to Kasturi Haldar, the Rev. Julius Nieuwland Professor of Biological Sciences and recipient of the 2019 College Research Award. Kasturi is an internationally recognized scientist who joined the Department of Biological Sciences in 2008 as the Director for what is now the Boler-Parseghian Center for Rare and Neglected Diseases. During her research career, she has made ground-breaking discoveries to advance the understanding of malaria pathogenesis and to develop novel therapies in both infectious and genetic diseases. Her work over the past several years has revealed a molecular mechanism of how Plasmodium falciparum malaria develops resistance to artemisinins, front line antimalarials for which there are still no replacement therapies.

Her more recent work on rare neurological diseases has been focused on molecular, organismic and neurobehavioral analyses and the development of potential biomarkers and treatments, using murine disease models. This work has led to the discovery of a triple combination formulation that boosts the level of histone deacetylase inhibitors across the blood brain barrier. This advance may have broad implications for the treatment of neurodegeneration and neurological diseases. This work has led to two submitted patents and the development of two companies to deliver new treatments for monogenetic lysosomal neurodegenerative disorders.

She has also developed a unique research undergraduate class where students interact with patient families to compile natural histories of rare diseases, directly expanding case descriptions for disease diagnoses and treatments. She has served as Editor in Chief of PLOS Pathogens, on the Novartis Science Advisory Board, and as a member of the Expert Scientific Advisory Committee of the Medicines for Malaria Venture, a leading consortium for the development of antimalarial treatments.