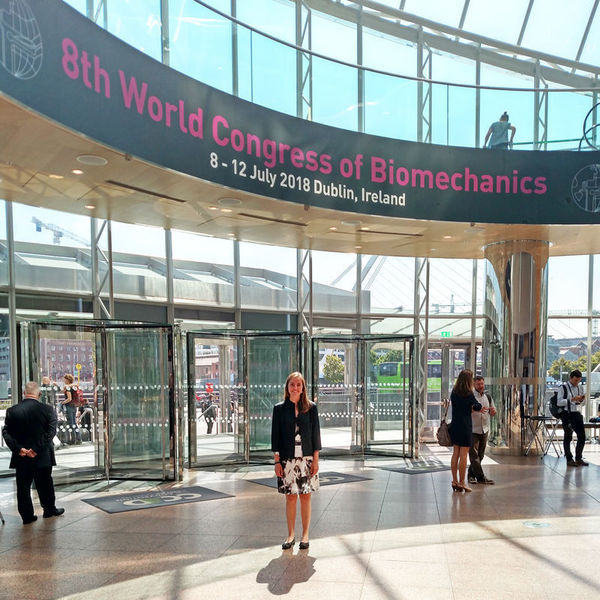 Kimberly Curtis at World Congress of Biomechanics in Dublin, Ireland

In describing her work, SCReM 2018 Travel Fellowship recipient, Kimberly Curtis finds that daily activities, such as walking or running, help bone to maintain a strong and healthy architecture due to its ability to adapt to mechanical loading. Osteocytes are resident cells embedded within the mineralized bone matrix and are able to sense mechanical stimulation and elicit a cellular response to increase bone mass. However, there are various cell types in the bone marrow, some of which are mechanosensitive and contribute to bone formation. In her tissue mechanics lab, they culture cylindrical trabecular bone explants harvested from porcine vertebrae in a custom bioreactor. The bioreactor enables them to mechanically stimulate the marrow independent of the osteocytes residing in the mineralized matrix. Using this system, they were able to detect a significant increase in bone formation in stimulated explants compared to unstimulated explants, indicating that marrow cells are mechanosensitive. They also measured an increase in mechanoregulatory cFos gene expression in stimulated marrow cells.

In the work that Kimberly presented at World Congress of Biomechanics, they were able to correlate the increase in cFos expression with an increase in shear stress imparted on the marrow cells. This signifies that the mechanobiological response in marrow cells is dependent on the shear stress that they experience. Determining the pathways by which marrow cells sense and respond to mechanical stimulation may prove beneficial in development of treatments for diseases characterized by bone loss.

Kimberly is conducting her research in the lab of Dr. Glen Niebur, Department of Aerospace and Mechanical Engineering, and affiliated member of the Center for Stem Cells and Regenerative Medicine.

Originally published by Laurie Gregory at stemcell.nd.edu on July 20, 2018.