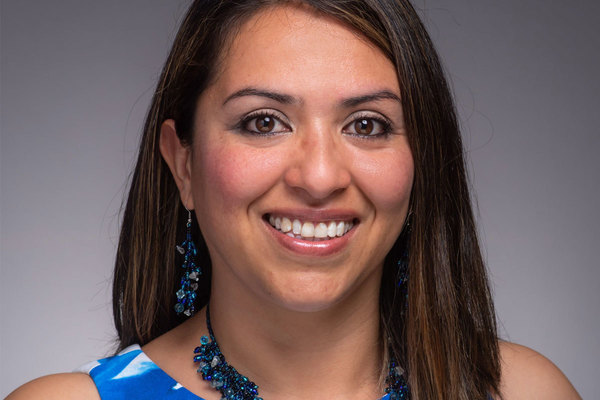 Ana Lidia Flores-Mireles researched one of the word’s largest organisms before a graduate school class sparked her interest in the tiniest ones.

She had been studying 60,000-pound gray whales during her program in marine biotechnology in Mexico, and was initially annoyed that she was required to take the class in marine microbiology.

“I was like, I am working with gray whales, so who cares about microbes? No one can see them,” said Flores-Mireles, who is now the Hawk Assistant Professor in the Department of Biological Sciences at the University of Notre Dame. But the class developed her interest in studying infectious diseases among gray whales, which have a highly inbred population. “I was too naïve,” she said about her earlier lack of interest in microbiology.

She learned about how the microbes communicated with each other, and how they organized themselves to cause infections. Her interest grew to the point where she was compelled to leave the whales behind to pursue the study of infectious diseases, and she enrolled in the doctoral program in microbiology at Cornell University.

Her research focus now is on catheter-associated urinary tract infections (CAUTIs), which are among the most common infections in hospitals and nursing homes. She not only has discovered why they occur, but is working toward developing new types of catheters to prevent infections. She became interested in catheters because of the abundance of clinical data showing that morbidity and mortality increased in people in hospitals and nursing homes with these infections, but the data was merely descriptive.

“There was no basic science being done about it,” Flores-Mireles said. “I wanted to understand what was happening.”

She noticed that different types of pathogens, including vancomycin-resistant enterococci and others, were not able to survive in urine, but did survive in the bladder when a catheter is in place. The bacteria E. coli and Klebsiella pneumonia are uropathogens and able to infect urinary tract in the absence of urinary catheters. However, the majority of the catheter-associated pathogens were not. “The question is, so what is different in the catheterized bladder that allows colonization by all of these different bacteria?” Flores-Mireles asked.

Flores-Mireles discovered that catheters induce severe inflammation, which triggers the recruitment of fibrinogen, a web-like protein found in blood plasma. Fibrinogen normally takes over as a healing agent. But when pathogens are present, the fibrinogen is used as both a nutrient source and a platform for microorganisms to stick to each other, called a biofilm. Therefore, the bladder becomes a “bed and breakfast” that allows pathogen proliferation. The longer the catheter is in place, the more damage is induced, and the more the fibrinogen comes to the rescue — which creates more niches for the bacteria to colonize.

But Flores-Mireles didn’t want to stop with just that discovery. She wants to solve the problem. Killing all the bacteria doesn’t work because it becomes resistant to different antibiotics, and patients develop more problems. Through further research, she and other collaborators discovered the regions of the bacteria that recognize and attach to fibrinogen. She developed antibodies that block bacteria from recognizing fibrinogen. When bacteria can not recognize the fibrinogen, they are not able to attach to it.

“We used this treatment in different clinical strains, in different species, and also with different profiles of resistance, and we were able to eradicate all of them,” Flores-Mireles said.

Thinking even further, Flores-Mireles is developing a new type of catheter that doesn’t allow fibrinogen to bind to it. Therefore, if fibrinogen is not present, the microbes that use fibrinogen as platform won’t be able to colonize.

She came to Notre Dame to work as part of a team of experts who not only study infections, but also understand inflammation and other areas. Translational work that spans all areas — from discovery of the problem all the way to solving it— is an important theme that Flores-Mireles imparts on her students.

As part of her undergraduate course in infectious diseases, she taught not only the scientific principles behind diseases, but also disease history and how it affects people. She covered diagnostics, therapies, and how to study disease even in clinical settings. Flores-Mireles is affiliated with the Eck Institute for Global Health.

In the fall, she and her husband, Felipe Santiago-Tirado, assistant professor of biological sciences who studies fungi and how it can infect the lungs, blood and brain are teaching a graduate-level course that covers the same topics. “We want to teach the graduate students how to think; how to do the translation of basic science to the bed side,” she said. “We want to cover not only new therapies but diagnostics.”

She and Santiago-Tirado have a two-year-old son, and as their schedules allow, they enjoy traveling, camping, and going to movies and musicals. And she still keeps in touch with some friends from her graduate school days.

“All of my friends who are working in microbes have asked me, remember when you complained about having to take a class in microbiology?” she said, and chuckled.

Originally published by Deanna Csomo McCool at science.nd.edu on August 27, 2019.