Christian Melander, the George & Winifred Clark Professor in the Department of Chemistry and Biochemistry, believes there may not be a university more invested in antibiotic research within the chemistry field than Notre Dame is. 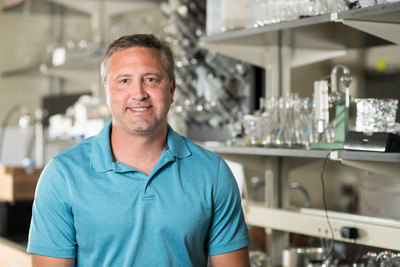 Between that dedication to research, and the new Warren Center for Drug Discovery, he felt it was an easy decision to move his lab here in September 2018 from North Carolina State, where he had spent the previous 14 years.

His work focuses on antibiotic resistance, with the biggest emphasis on how the resistance portion itself can be treated. Melander’s group works within two main areas of resistance — chronic infections, those in which the patient gets better on antibiotics but then gets sick once the course of treatment has finished, and standard infections, like methicillin-resistant Staphylococcus aureus (MRSA), which don’t respond to several different antibiotics.

“When the bacteria has become resistant, you want to somehow be able to beat that problem,” Melander said. One way is to inhibit an enzyme or enzymes in the bacteria that  “chew up” the antibiotic, making it less effective. A classic method of doing this is adding another drug in combination with the primary drug. In the United States, the antibiotic Augmentin accomplishes this task. It’s amoxicillin combined with clavulanic acid.

“In situations where the bacteria is resistant to penicillin because of presence of a beta lactamase, clavulanic acid will inhibit the destruction of the beta lactamase on the antibiotic, allowing it to work again,” Melander said. Just four beta lactamase inhibitors are used in clinics, and Melander’s group has come to the conclusion that there must but other options that will achieve the same results, but for other classes of antibiotics.”

Melander, who graduated from the University of California-Davis with a bachelor’s degree in chemistry, earned his masters’ degrees and doctoral degree in chemistry from Columbia University. After completing post-doctoral research at The California Institute of Technology and working as a research associate for The Scripps Research Institute, he began his professorial career as an assistant professor at North Carolina State University in 2004. He became a full professor there in 2013.

He didn’t know at first that he would dedicate his research to antibiotic resistance. “When I started as an assistant professor, I had several things I was looking at,” he said. “This worked well for me, and it had the highest potential for value.”

Melander has encountered antibiotic resistance in a personal way. In 2017 his father contracted a staph infection in his spine, which antibiotics failed to treat, and required surgery. The surgery on his spine caused Melander’s father to be a paraplegic for a time, and his illness was complicated by pneumonia. He eventually contracted Clostridrium difficile (C. diff), a bacteria that occurs when patients have been on several courses of antibiotics that disrupt the normal, healthy bacteria in their colons.

“The doctor told him essentially that he should have died three times and he survived that, but he’s learning to walk again,” Melander said. “It’s a long process to recover from; people are telling me that this type of recovery is a marathon, so years and years of therapy he has to do every day.”

Melander taught an advanced graduate-level class in 2018-2019 and will be rotated into teaching undergraduates at some point. Outside of work he focuses his energy on spending time with his three children, ages, 4, 10, and 12, and has papers on the horizon that focus on antibiotic resistance as it relates to tuberculosis and cystic fibrosis.

Originally published by Deanna Csomo McCool at science.nd.edu on June 03, 2019.