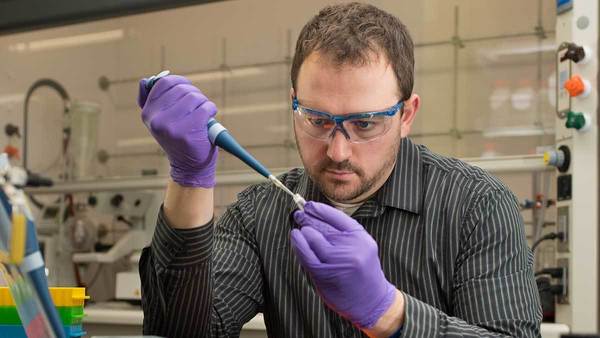 For parents of children with Type 1 diabetes, the threat of a hypoglycemic episode can keep them awake at night. Critically low blood glucose levels can lead to seizures, coma or death. With no warning of a sudden drop, some parents will wake up several times each night to check their child’s blood glucose level while they sleep. Sleep loss and stress can impact the parents’ own health and well-being — putting added strain on the whole family.

The issue is central to a five-year research effort funded by the American Diabetes Association (ADA). The ADA announced it will fund a $1.625 million Accelerator Award to Matthew Webber, assistant professor in the Department of Chemical and Bimolecular Engineering and faculty member of the Integrated Biomedical Sciences PhD program at the University of Notre Dame, to research and develop materials capable of sensing critical drops in blood glucose.

Presently, dangerously low hypoglycemia is treated by injecting glucagon, a hormone that counteracts the function of insulin to raise blood glucose levels. This places the responsibility of noticing such an episode and responding in time directly onto diabetics and their caregivers. “There is a significant challenge to developing a synthetic form of glucagon that would remain in the body but be inactive until such a time as blood glucose levels become dangerously low, when it would become active,” said Webber. “This is something that has never been done before. Our team will explore different chemistries and methods for protein activation over the course of the study.”

Research would focus on development of glucose-responsive glucagon. If successful, glucose-responsive glucagon could be administered to patients with Type 1 diabetes in a manner similar to an EpiPen before bed. Sensing a critical drop in blood glucose, the modified glucagon could be activated to restore normal glucose levels and alleviate the severe risks associated with hypoglycemia. “If we are successful, this new approach would act as an insurance policy, offering peace of mind to diabetic individuals and their caregivers.” Webber’s previous work includes developing synthetically modified insulin with glucose-modulated potency, capable of correcting blood glucose levels quickly to manage the disease more accurately.

The Accelerator Awards are designed to support early-career investigators, and are part of a larger initiative by the American Diabetes Association known as the Pathway to Stop Diabetes, seeking to recruit investigators across disciplines in an effort to radically transform diabetes research.

Edited from an article originally published by Jessica Sieff at news.nd.edu on February 19, 2019.