Growing up in South Bend and earning her degree from St Mary’s college, Katharine White never thought she would move back to the area. After all, White experienced the country from coast to coast from historic Boston to sunny California after her undergraduate career. Nevertheless, 12 years after earning her bachelor’s degree in chemistry, White now finds herself back as the Clare Booth Luce Assistant Professor of Chemistry and Biochemistry at Notre Dame. 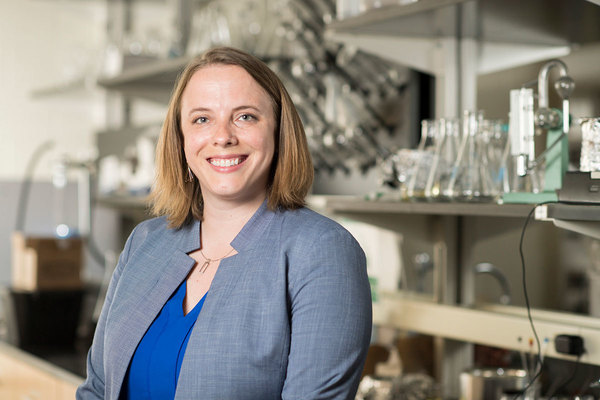 White had just successfully defended her doctoral thesis at the Massachusetts Institute of Technology in 2012 when she returned for the St. Mary’s class reunion and noticed how much South Bend and Notre Dame had changed since her undergraduate years. “I saw all of the great things Notre Dame had built up, particularly in research support, and so I put Notre Dame on my radar in terms of where I would send my applications for faculty positions,” White said. With her research focusing on the molecular mechanisms of cancer, White was especially drawn to the newly built Harper Cancer Research Institute at Notre Dame.

However, entering the field of chemistry academia was not always a given for White. It was not until a summer of undergraduate research at Columbia University that White switched out of her math major. “That changed my whole career trajectory. I knew at that point that I wanted to pursue a Ph.D., but I was not sure that I would end up in academia doing research,” White said.

White noted how the research environments and various universities can vary significantly. While at MIT, White thought that researchers had little work-life balance and exhibited an unhealthy degree of competition in the work environment, which pushed her away from the field.

However, White’s six years a postdoctoral research fellow at the University of California, San Francisco reaffirmed her interest in pursuing a faculty position at the post-secondary level. “I found a lot of cases where faculty were much more engaged with their students’ learning and had more of a balanced life outside of their work,” White said.

And now White is living that life of academia as she spends her time in the lab conducting her cancer research. White studies how pH dynamics regulate proteins, pathways, and cell behaviors. According to White, normal cells have a pH of 7.2, while cancer cells have a pH of 7.6. That difference in pH is sufficient to enable the cancer to spread. White’s lab develops new tools to manipulate the pH in cells to better study the effects, and applies those tools to identify the molecular mechanisms that influence cancer cell behavior.

When she is not in the lab, White does what drew her to the field in the first place: teaching.

In a way, teaching had always been in the cards for White. Her father was an English professor at St Mary’s while her mother was a professor of nursing at Indiana University South Bend. “It was kind of a trajectory I always had in the back of my mind,” White said. “The idea of being on an academic schedule, teaching, and helping new students find a love for the field was really important to me growing up, as I saw the dedication my parents had.”

The teaching aspect of her work was one of the main reasons she chose Notre Dame. “I knew I did not want to be in a place where I did not have access to teach and mentor undergraduates,” White said. “I find it really rewarding to communicate things I love about science to people new in the field.”

White is especially committed to seeing more women and underrepresented minorities succeed in the sciences. “That really requires catching those students early on and acting as a mentor for them. Students who are skilled in the field at the undergraduate level but who may not have the necessary career direction or support need that extra push,” White said.

While White has some qualms about returning to Midwest winters, she has no regrets about returning to South Bend. “It’s been flawlessly fun,” said White, who quickly added, “for the whole three weeks I’ve been here! This is my dream job, and I’m loving every second of it.”