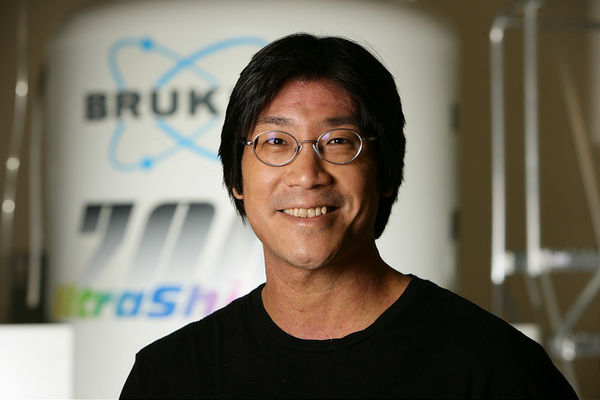 Jeff W. Peng, Associate Professor of Chemistry and Biochemistry with a concurrent appointment in Physics, and faculty member of the Biophysics Graduate Program, was recently awarded a $1.1 million grant from the National Institutes of Health (National Institute for General Medical Science) to investigate the proteins mechanisms enabling Gram-negative bacteria to resist β-lactam antibiotics, or simply, “β-lactams.”

The β-lactams are a vast family of antibiotics that include the well-known penicillins; they remain the most widely administered antibiotics around the globe.  Results from this research could reveal new strategies for coping with the expanding scope of β-lactam resistance now happening among Gram-negative pathogens.

Disease-causing Gram-negative bacteria have gained public notice as potential “superbugs,” causing serious, even fatal infections in hospitals and clinics. Examples of such bacteria include Acinetobacter baumannii (A. baumannii) and Pseudomonas aeruginosa (P. aeruginosa).

This concern has motivated numerous studies to understand how these mutations work at the atomic level. The main approach has been determining 3-d atomic structures of mutant β-lactamases, typically using x-ray diffraction of crystallized proteins. The tacit assumption – that the mutation effects are structural in origin – is a cornerstone of modern biochemistry and biology.

By contrast, Peng’s research will focus on an equally important, yet less-examined molecular property of proteins: their internal dynamics, or flexibility. And for good reason.

Peng’s group, in collaboration with Prof David Leonard of Grand Valley State University, recently investigated a β-lactamase variant from a clinical strain of A. baumannii carrying a single point mutation responsible for expanded activity. Notably, the mutation was not in the buried active site pocket (where the captured antibiotic is cut open); instead it was in an adjacent flexible surface loop, at the vestibule of the active site. Using high-field multidimensional NMR spectroscopy, Peng and his group showed that the mutation changed the protein dynamics – in particular, the amplitude and time scales of motion for the surface loops. The mutation also had unexpected long-range or “allosteric” effects, perturbing the motions of other surface loops known to be important for recognizing the antibiotic.

Peng continued with the scissors analogy. “It’s as if the mutation made the scissors more effective, not by changing its structure, but instead by changing the breadth and rapidity by which it opens up.“ Their findings have potentially broad implications as to how resistance-enhancing mutations work, since many other β-lactamases have similar placement of flexible gating loops guarding their active sites.

“If we take seriously the sentiment that evolution is opportunistic, then it makes sense that internal dynamics, alongside structure, can be exploited for adaptive evolution. What we’re seeing is that the evolution of these resistance proteins has a dynamic component that deserves deeper study. NMR spectroscopy is great for this because it reveals protein dynamics at atomic resolution, and over a broad time scale.  We are grateful to the NIH and NIGMS for the opportunity to do this. “

Uncovering the relationship between protein dynamics and their functional evolution is an emerging field in at the interface of physics and biology. “Now is an exciting time to get involved,” said Peng. “There has been lots of work describing protein dynamics, which has led to growing acceptance of proteins as molecular machines with moving parts. The challenge now is to go beyond description, and get a predictive understanding of those motions in the context of protein evolution. Grappling with the problem of antibiotic resistance gives us an avenue to do this.”

Originally published by Cheryl Schairer at biophysics.nd.edu on August 28, 2018.