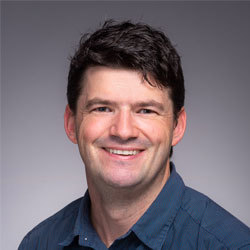 South Bend may not have mountains for downhill skiing, but that’s a small thing in comparison to the opportunities Cristian Koepfli has found at Notre Dame to continue his research to understand the deadly disease of malaria.

“I grew up in a small village, so with a three-year-old son, big cities lose a lot of appeal,” said Koepfli. “We found a nice home here with a large garden, and it is affordable.”

He first learned about a faculty position at Notre Dame while at a conference a couple of years ago. At that time, he knew nothing about the university and had to look up exactly where it was located. After doing more research, he quickly realized that there was a lot of interesting work being done and he decided to apply.

“When I met the people here, I realized Notre Dame was going to be a very good thing for me,” said Koepfli.

He came to Notre Dame from the University of California, Irvine, where he was an assistant project scientist. He completed his post-doctoral fellowship at the Walter and Eliza Hall Institute for Medical Research in Melbourne, Australia and got his doctoral degree at the Swiss Tropical and Public Health Institute in Switzerland in 2012.

Military or community service is required in Switzerland. After completing his master’s degree in biology, he went through the list of approved institutions, researching community service opportunities.  The Swiss TPH in Basel was the only place that required a background in biology and lab work. For his master’s thesis, Koeplfi studied how proteins impacted fruit flies – nothing at all related to malaria parasites. Yet his application for the position at Swiss TPH was approved. After working there for several months and successfully completing a project, his supervisor asked if he was interested in working towards a PhD.

Ironically, while he preferred community service to joining the army, the first email he received in response to his first publication came from the Australian Army Research Centre asking for details of his methods. “In the meantime, I’ve had the chance to meet the people from the Centre and learn about the great work being done there.”

The complexity and urgency of the disease of malaria, which is estimated to have resulted in 219 million cases worldwide and killed more than 400,000, provides a challenge appreciated by Koepfli, who has done field work in Ethiopia, Kenya, and Papa New Guinea, among other locations. His research focuses not only on those who are sick and have been treated but also on those who transmit the disease, who may not realize that they carry it.

Malaria is caused by parasites that are transmitted to people through the bite of infected mosquitoes. Often the density of the parasite in the blood is very low and thus difficult to detect using the diagnostic tools available in endemic countries, such as microscopy, which Koepfli said has changed little during the past 100 years.

To understand who is infected and might transmit the parasite, Koepfli collects blood samples from thousands of individuals and studies them in the lab using very sensitive methods. Koepfli likens what he does as a next step to the genetic fingerprinting seen on television shows such as CSI, except in his case he is genotyping parasites in the field.

“The number one killer in the world is the mosquito. It can bring a population down,” he said, noting that a large majority of the victims are children. The World Health Organization reports that while significant progress was made in treating the disease at the turn of the century, at this point progress has stalled and even reversed in some countries. For example, since the beginning of the year, about half of the 10 million people living in Burundi have contracted the disease.

According to Koepfli, there is no silver bullet that will eradicate the disease. A one-dose vaccination does not exist. While treated netting and spraying has reduced malaria, it stubbornly remains a significant health threat in many countries, where poverty contributes to its proliferation.

“I consider the work I do very important. At this point no one really knows how to go forward and we have to explore different avenues.”

Originally published by Kathy Jonas at science.nd.edu on September 03, 2019.